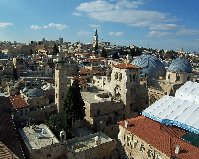 When you enter the downtown of Jerusalem you´ll meet something brand-new:  first time in the city history  there moves a  tram like a quick snake through in the streets, finally climbing up the most important route, Jaffa Road. Everybody seems to be eager to have at least a short drive – last November  the new vehicle was  still under testing and you did  not need to pay at all. It`s popularity was amazing. The tram seemed to equalize or smooth  out , even create a new kind of atmosphere: the Orthodox Jews with their black wide-brimmed hats stand besides white-scarfed Palestinian ladies, all obviously happy with this  smooth drive.
An other  small sign of adaptation or  at least a fuse into a more coherent whole were the languages spoken. For the better observation  of  ethnic amalgamation I again reserved hotel nearby the Old City, Capitol Hotel, on the Arabic speaking section. It was interesting to see that this Arab hotel answered to customers both  in Arabic and as well as in Hebrew, but according my understanding no Israeli guests were inside: so far the real gap in fact seems to  exist.
A third new positive element were the practices at the Ben Gurion airport. Since my last trip the handling of suitcases had indeed totally changed: in earlier years every single luggage was open and discussed: who did  pack, were was the luggage  kept, has anyone touched or given something etc. After this cross-examination  an other person came with the very same  questions. This time suitcases were put through x-raid, no pedantic checking at all. The services at enlarged  terminal with different check-in areas for particular flights were ok. The atmosphere was peaceful even in all corners outside Jerusalem like at  Masada, Dead Sea and Galilee tours.
Then about  the situation in general. It is very sad to see the historic Mountain of the Olives split up with high, about 6- 8 m, walls. The impression is indeed unbelievable, and more: considering of universal interests,  geographical and the  religious values, it is shameful!  Approximately  800 000 Palestinians had to leave their homes (recently according the Israeli professor Ivan Pappe). Now 385 000  Jewish settlers in 80 settlements will be located round on the hills.
Curious enough: 35 000  Palestinians require permits to live in their homes and they have to leave their communities through a gate in the Wall. The costs of the Wall are estimated at 2.1 billion.  There are now 34 fortified checkpoints, 3 main terminals, 9 commercial  terminals and alternative roads, cost  some 2 billion NIS. (according Dr. Haseeb Shehade and Ussama Masalha).
These figures are very puzzling and indeed a big annoyance to me and  to my German friend Ulrich Kruggel , who once asked me to join to trip. What  could be the outcome from this tense situation around the Holy City?
Then we moved inside the Old City Walls. The reunification of the city in June 1967 changed profoundly the character of the city. The Western Wall of the Temple Mount, the holiest site of Jewish People,  was restored. The archaeologists start to dig and unearth traces no less  than eight civilizations, not only Jewish but also reflecting the world cultures. First the inhabitants rushed to the Western Wall, as the common expression of faith, and further to the Arab section Jerusalem, to which they did have no access since 1948 at all.
The immediate re-linking of the whole city area was achieved. The archeologists were directed by medieval mosaic map found in Madaba, Jordan.  On this map depicted on stone there is Medieval Jerusalem; through the Old City there runs a main street called cardo. The cardo starts from the Damascus Gate and runs through the Old City.  The diggers could erase only the parts which was open and without buildings. They could detect the line of the medieval business passage (show the scetch). But still far more: they could open parts of streets and palaces, synagogies  under Roman times. Today  this section serves as popular open-air museum and is called Herodian Quarter. If we look at the beginning of the Damascus Gate, which once upon a the time was the starting point, to Damascus,  there is now the amphitheatre  and steps to the opening of Roman archway.
Let us enter the strong-smelling bazaars! One section of Christian Quarter is called S t. John`s Convent. In the beginning of 70th I was working at the office of Finnish Missionary Society; the Society introduced  its activity in Palestine already 1920th. There is Lutheran,  called Redeemer`s Church.  At the Church was working Mrs Alice Younan, who had a son called Munib. I was sent to  Jerusalem to meet Alice`s son and  make an evaluation whether Munib Younan filled qualications needed for a scholarship in Finland. So Munib came  to Finland. First night he slept in our flat at Vuorimiehenkatu. Our about 5 years old daughter  Riikka was very keen to meet a real Arab, apparently dressed in long costumes and scarfs like Beduins. Early in the morning she went slightly open the door, turned  back very disappointed: Munib, our guest looked like any normal young boy, without any exotic clothing of a sheikh!
Munib was a gifted young man. He  first graduated as a deacon,  entered University of Helsinki and got his masters in theology –was ordained and  worked e.g.  in Ramallah. And now ishallah the circle closes: his successor Ramez  Ansara is among us. In 1998  Younan was consecrated as bishop.  In July 2010 he was elected president of the LWF, a global communion of Christian churches with 145 member churches in 79 countries representing more than 70 million Christians.
Conflict with Israel/Palestine is not derived from ancient times. The concept  modern “Israel” is a product    ideological Zionism, Palestine being the land which in the beginning of 1900th century  granted  a political asylum for the persecuted Jews when the western countries shut the doors.The two state solution is now late: it is high time to test the idea of federation between Israel and a Palestinian state with basic civil rights and the freedom of movement for all citizens!

To sum up: The state of Israel  was built on high social ideals, but it still violates  the rights of a  part of its population. The  only possible solution would be to secure the same rights to all inhabitants, regardless of race, gender or religion.  It means  that Israelis give up all national prerogatives, their Zionistic ideas and the Palestinians stop the violence and finally all walls will be crushed down.  Of course, the real power behind the Near East lays in the hand of the United State.  And big part of anti-Semitism of our time is due to unsolved Near East problems. Nevertheless: I do  have a dream:  not of two but one peaceful state, of a day when in the new tram  the Orthodox Jew smiles and  shakes the hand of a Palestinian lady and say: shalom, salaam!
Lähettänyt Aarne Toivanen klo 10:02